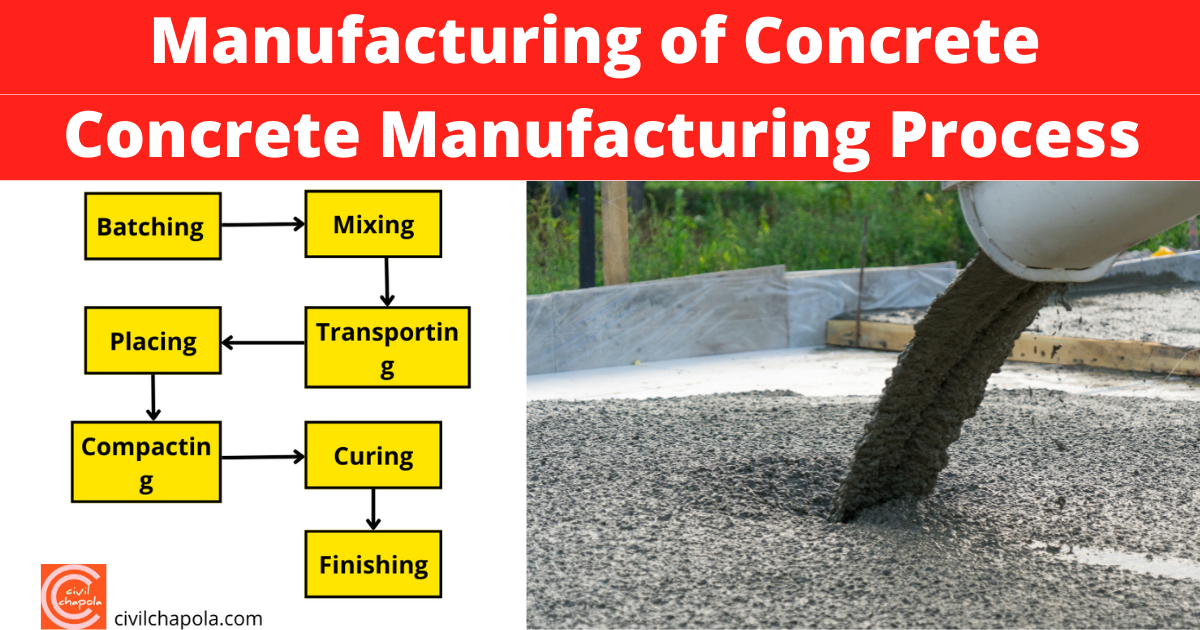 Good quality concrete is essentially a homogenous mixture of cement, coarse and fine aggregates, and water which consolidates into a hard mass due to chemical action between cement and water.

Each of the four constituents has a specific function:

The aim of quality control is to ensure the production of concrete of uniform strength from batch to batch. This requires some rules to be followed in various stages of concrete production and are discussed as follows.

The Stages of Concrete Manufacturing Process: 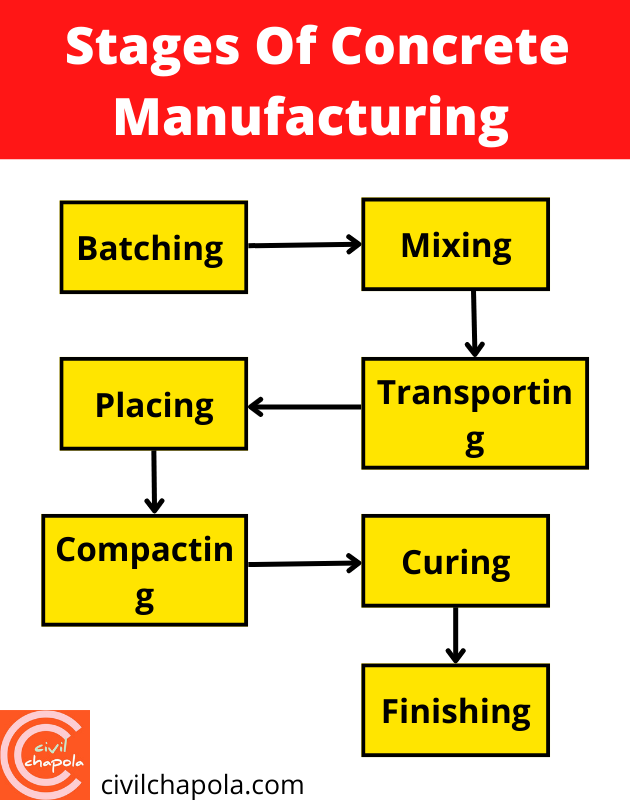 There are two prevalent methods of batching materials are:
(a) Volume batching
(b) Weight batching

For example, the volume of moist sand in a loose condition weighs much less than the same volume of dry compacted sand.

Hand mixing is adopted for small jobs where the quantity of concrete involved is small and the approximate time is 2 minutes and should never exceed 3 minutes.

The machine mixing is done by using

The transporting of concrete can be done by the following methods

1. Pans: Recommended only for small jobs.

3. Chutes: When concrete is to be deposited below ground level at a higher depth, it can be discharged through a steel shaft called a chute.

4. Concrete Pumps: It is used commonly for tunnel works and on locations that are not easily accessible where concrete can be pumped for a distance of about 400 m. horizontally and 80 m vertically having slump values of 50 mm to 100 mm and the pipe used in the concrete pump has a diameter of 10 cm to 20 cm.

5. Transit Mixer: Transit mixer is a truck on which a concrete mixer is mounted and is useful in built-up areas.

6. Belt-conveyer: A belt conveyor is used when the concrete is to be transported continuously and to an inaccessible area.

The process of removal of entrapped air and of uniform placement of concrete to form a homogeneous dense mass is termed compaction.

The density and consequently the strength and durability of concrete depends upon the quality of compaction.

The presence of even 5% and 10% voids in hardened concrete left due to incomplete compaction may result in a decrease in compressive strength by about 30% and 60% respectively.

The various types of vibrators used are:

These vibrators are attached to the formwork and external centering of walls, columns, etc. The vibrating action is conveyed to concrete through the formwork during the transmission of vibrations. Hence they are not generally used.

But they are very much helpful for concrete sections which are too thin for the use of internal vibrators.

It is very efficient in compacting stiff and harsh concrete mixes required for the manufacture of precast elements.

To prevent the loss of moisture from concrete due to evaporation or any other reason supply additional moisture or heat and moisture to accelerate the gain of strength.

To keep capillary pores saturated to ensure hydration of cement; to increase durability, and impermeability of concrete, and reduce the shrinkage.

As per IS: 456 concrete members shall be kept under curing for a minimum period of 7 days for OPC at 90% humidity and at least 10 days where mineral admixtures and blended cement are used.

For concrete mixes with a water-cement ratio ranging from 0.3 to 0.7 the increased rate of strength development can be achieved by resorting to steam curing.

This method of curing is also known as accelerated curing since an increased rate of strength development can be achieved.

Concrete members are heated by steam at 93°C either at low pressure or high pressure.

It reduces the shear strength of concrete.

It also results in increased resistance to sulphate action and to freezing and thawing.

The rate of increase or decrease of temperature should not exceed 10 to 20°C per hour to avoid
thermal shocks.

“Infra-Red Radiation” is also a helpful method of curing for Rapid Gain of Strength.

Finishing is defined as the process of leveling and smoothing the top surface of freshly placed concrete to achieve the desired appearance is done as follows:

1. Screeding: Striking off the excess concrete to bring the top surface up to proper grade is called screeding.

2. Troweling: Final operation of finishing be done after all excess water has evaporated by steel float in conical shape giving a very smooth finish.

The strength of concrete depends upon both the time as well as temperature during the early period of gain in strength. The maturity of concrete is defined as the summation of the product of time and temperature.

Its units are °C hours or °C days.

The temperature is reckoned from -11°C as origin in the computation of maturity, since hydration continues to take place about up to about this temperature.