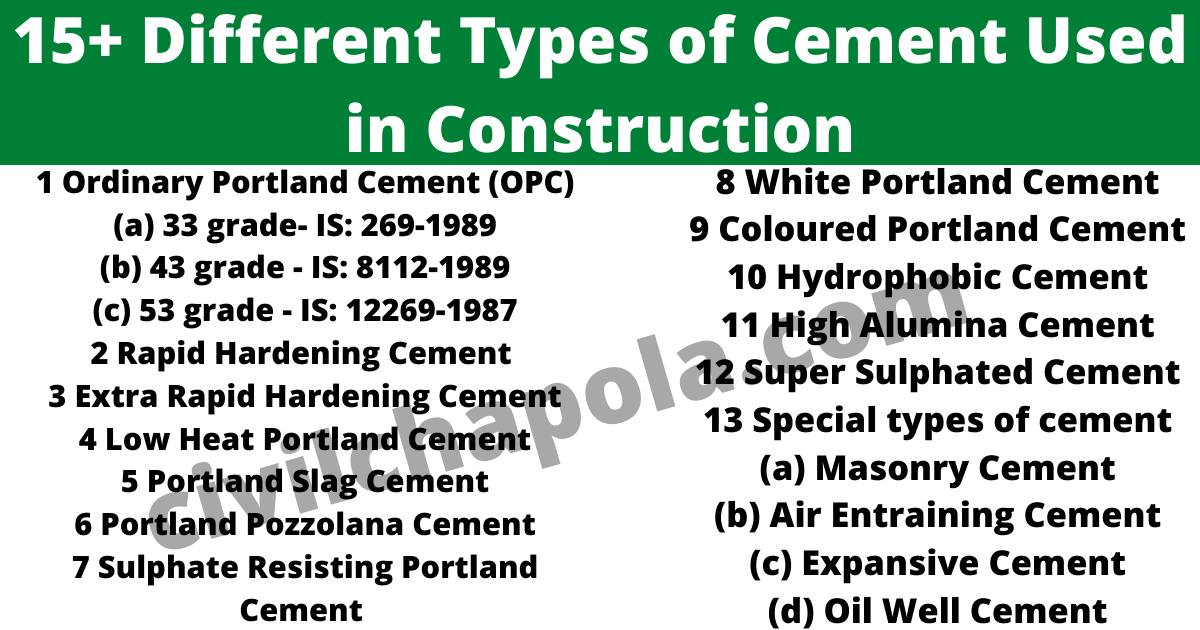 There Are Different Types of Cement As Classified By The Bureau of Indian Standards (BIS):

It is obtained by Pulverizing argillaceous and calcareous material in correct proportion.

Portland cement is the most common variety of artificial cement and is most commonly known as O.P.C. (Ordinary Portland Cement).

The number 33, 43, and 53 corresponds to 28 days of characteristic compressive strength of cement as obtained from a standard test on cement sand mortar (1:3) specimens.

The OPC 33 is recommended for concrete mix having strength up to 20 N/mmi.e. M20.

These are most commonly used in general concrete construction, where there is no exposure to sulphates.

Due to high fineness, the workability of concrete increases for a given water-cement ratio. IS10262 has classified the OPC grade-wise from “A to F” based on 28 days of compressive strength as follows:

It is presently available in three different grades viz. OPC 33, OPC 43 and OPC 53. The numbers 33, 43 and 53 correspond to the 28 days (characteristic) compressive strength of cement as obtained from standard tests on cement-sand mortar specimens.

It is used in general concrete construction where there is no exposure to sulphates in the soil or in groundwater.

It is finer than ordinary Portland cement.

It contains more C3S and less C2S than the OPC.

The 1-day strength of this cement is equal to the 3 days strength of OPC with the same water-cement ratio.

The main advantage of rapid hardening cement is that shuttering may be removed much earlier, thus saving considerable time and expenses.

Rapid hardening cement is also used for road work where it is imperative to open the road traffic with minimum delay.

The cost of Rapid hardening cement is nearly 10-15% more than OPC.

It can be safely exposed to frost as it matures more quickly.

The acceleration of setting, hardening and evolution of heat in the early period of hydration makes this cement very suitable for concreting in cold weather.

The use of extra rapid hardening cement is prohibited in prestressed concrete construction.

The maximum time of using this cement is 20 minutes for mixing, transporting, placing and compaction.

It is a Portland cement that is obtained by reducing the more rapidly hydrating compounds, C3S and C3A and increasing C2S.

Since the rate of gain of strength of this cement is slow, hence adequate precaution should be taken in its use such as with regard to removal of formwork, etc.

It has a low rate of gain of strength, but the ultimate strength is practically the same as that of OPC.

This cement is made by intergrinding Portland cement clinker and granulated blast furnace slag.

The proportion of the slag is not less than 25% or more than 65% by weight of cement.

The slag should be granulated blast furnace slag of high lime content, which is produced by rapid quenching of molten slag obtained during the manufacture of pig iron in a blast furnace.

The heat of hydration of Portland blast furnace slag cement is lower than that of OPC. So this cement can be used for mass concreting but is unsuitable for cold weather.

It has fairly high sulphate resistance, rendering it suitable for use in environments exposed to sulphates in the soil or in groundwater).

It is used for all-purpose for which ordinary Portland cement is used.

Because of its low heat evolution, it can be used in mass concrete structures such as dams, foundations and bridge abutments.

As per the latest amendment, the proportion of pozzolana may vary from 15 to 35% by the weight of cement clinker. Earlier, it was 10 to 25%.

Fly ash is a waste material generated in a thermal power station when powdered coal is used as a fuel.

PPC produces less heat of hydration and offers great resistance to the attack of impurities in water than OPC.

PPC is particularly useful in marine and hydraulic constructions, and other mass concrete structures

This cement has a higher resistance to chemical agencies and to seawater because of the absence of lime.

It evolves less heat and its initial strength is less but its final strength (28 days onward) is equal to ОРС.

It has a lower rate of development of strength than OPC.

An acid-resistant cement is composed of the following:
(i) Acid-resistant aggregates such as quartz, quartzites, etc.
(ii) Additive such as Na SiF (This accelerates hardening).
(iii) Solution of sodium silicate or soluble glass (sodium silicate is a binding material).

The addition of 0.5% of linseed oil or 2% of cerussite increases resistance to water also.

The Portland cement with low C3A and C4AF and ground finer than OPC is known as sulphate resisting cement and generally, C3S and C2S are kept at about 45 % each.

This cement is sulphate-resistant because the disintegration of hardened concrete is caused by the chemical reaction of C3A with soluble sulphate lime MgSO3. Caso4 and Na2so3 are inhibited.

The setting time is the same as that of OPC.

This cement is “sulphate resistant” because the disintegration of concrete caused by the reaction of C3A in hardened cement with sulphate salt from outside is inhibited.

It is used in marine structures, sewage treatment works, and in foundations and basements where the soil is infested with sulphates.

However, recent research indicates that the use of sulphate resisting cement is not beneficial in environments where chlorides are present.

The process of manufacturing white cement is the same but the amount of iron oxide which is responsible for the greyish colour is limited to less than 1 per cent.

Sodium Alumino Ferrite (Cryolite) Na, AIF, is added to act as a flux in the absence of iron oxide.

The properties of white cement are nearly the same as OPC.

The whiteness of white cement is measured by the ISI scale or Hunter’s scale.

The whiteness should not be less than 70% on the ISI scale and on Hunter’s scale, it is generally 90%.

The strength of white cement is much higher than what is stated in IS: 8042-1989, the code for white cement.

It is very different in composition from Portland cement.

In this cement, the CSA content is very low due to which it is resistant to sulphur attacks and chemical attacks.

Its sets quickly and attains higher ultimate strength in a short period. Its strength after 1 day is about 40 N/mm2 and that after 3 days is about 50 N/mm2.

It is characterized by its dark colour, high early strength, and high heat of hydration.

The raw materials used for its manufacture consist of limestone (or chalk) and bauxite which is a special clay with high alumina content.

Bauxite is an aluminium ore. It is specified that total alumina content should not be less than 32 per cent and the ratio by weight of alumina to the lime should be between 0.85 and 1.30.

It is resistant to freezing and thawing.

It is used where early removal of the formwork is required.

It must not be mixed with any other type of cement

In the manufacture of this cement, gypsum content is reduced to get the quick setting property. Also, a small amount of aluminium sulphate is added.

It is ground much finer than OPC.

It is used when concrete is to be laid underwater.

Masonry cement consists of a mixture of Portland cement or blended hydraulic cement and plasticizing materials (such as limestone or hydrated or hydraulic lime) together with other materials introduces to enhance one or more properties such as setting time, and workability, water retention, and durability.

The addition of these materials gives good workability and reduces shrinkage and water retentively.

This cement is used for masonry works, plasterwork etc.

This cement must not be used for concrete work but used far Masonry construction.

Masonry cement when used for making mortar, incorporates all the good properties of lime mortar and discards all the non-ideal properties of cement mortar.

In this cement CA, which is susceptible to sulphates is limited to less than 3.5%.

Sulphate resisting cement can also be produced by the addition of extra iron oxide before firing this combines with alumina which would otherwise form C3A instead of forming C4AF which is not affected by sulphates.

It should be used in places with temperatures below 40°C.

It has a low heat of hydration.

It is used for the construction of dams and other mass concreting works.

Concrete made from super sulphated cement may expand if cured in water and may shrink if the
concrete is cured in air.

It has high resistance to chemical attacks.

It is manufactured by mixing a small amount of air-entraining agent i.e. 0.1% to 0.3% with OPC clinker at the time of grinding.

It offers good workability due to which it is having higher initial setting time than OPC.

It is having lesser final setting time as compared to OPC, due to which it offers resistance to freezing and thawing.

Air entrainment improves workability and the w/c ratio can be reduced which in turn reduces shrinkage etc.

It is yet not been covered by Indian Standard so far.

Some of the air-entraining agents are:
(i) Alkali salts of wood resins.
(ii) Synthetic detergents of the alkyl-aryl sulphonate type.
(ii) Calcium lignosulphate.

It produces tough, tiny, discrete, non-coalescing air bubbles at the time of mixing in the body of concrete which will modify the properties of plastic concrete with respect to workability, segregation and bleeding

It is obtained by intergrinding OPC with 0.1-0.4 per cent of water-repellant film-forming substance such as oleic acid or stearic acid

The water repellant film formed around each grain of cement reduces the rate of deterioration of the cement during long storage, transportation, or under unfavourable conditions.

The properties of hydrophobic cement are nearly the same as that of OPC.

The cost of this cement is nominally higher than OPC.