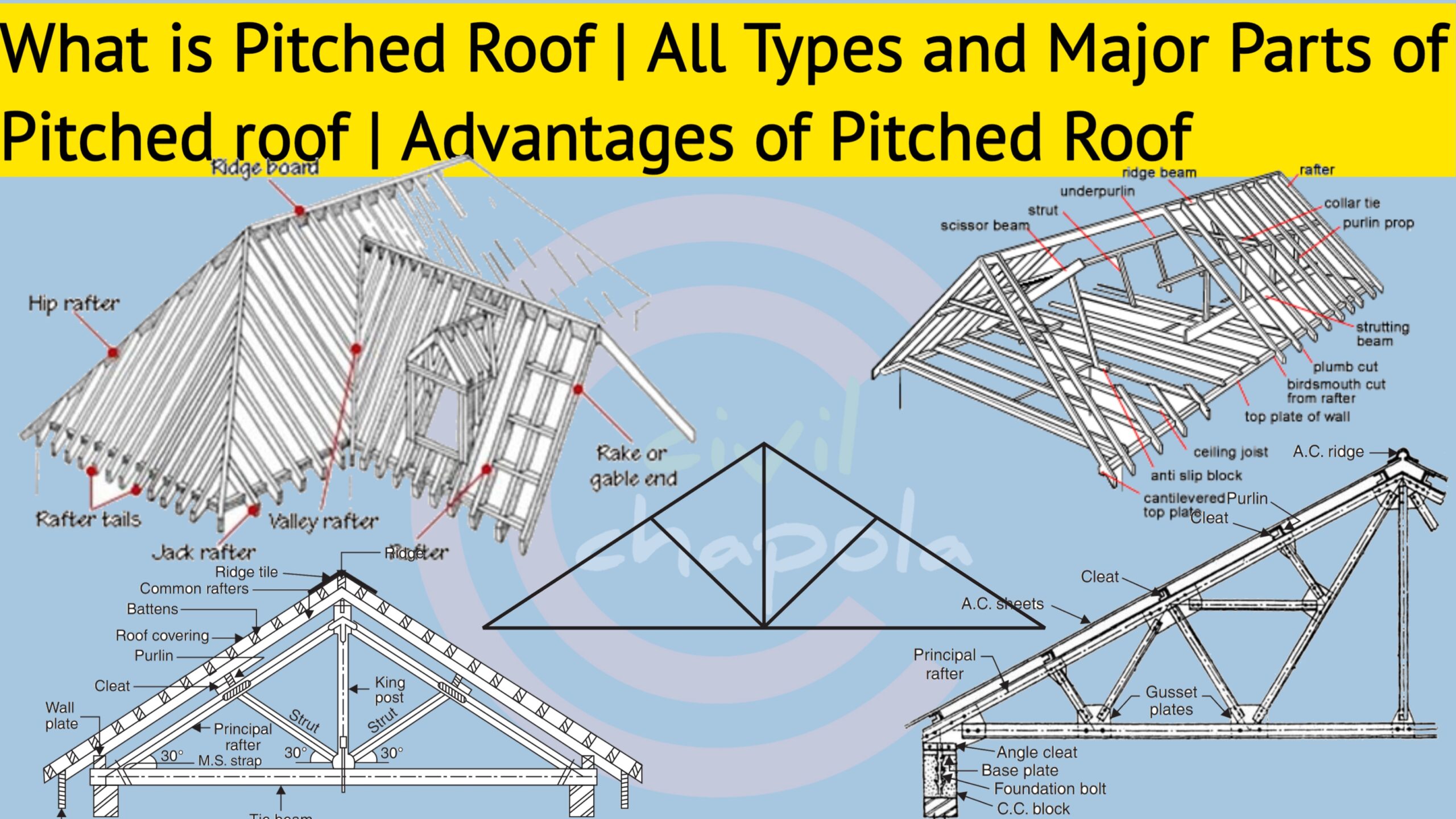 In areas of heavy rainfall and snowfall, sloping roof is used. The slope of the roof should be more than 10°. Their slopes can be from 45° to 60°. Sloping roofs are known as pitched roofs. Sloping roofs are preferred in large spread structures such as workshops, factory buildings, and warehouses. like covering sheets in all these roofs
AC sheet, GI Sheets, tiles, slates etc. are supported on suitable structures.

If the span of the roof is less than 5 m the following types of single roofs are
used.

* In all these roofs rafters placed at 600 mm to 800 mm spacing are the main members taking the load of the roof. Battens run over the rafters to support tiles.

The lean-to roof is defined as a single slope roof with its upper edge adjoining a wall or a building.

Lean-to roof is the simplest type of pitched roof. The pitched roof is also known as a sloping roof. It is the most common roof and is generally regarded as the cheapest alternative for covering structures. 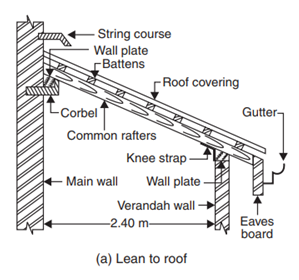 The common rafters rest at 30 degrees against a wall. The length of this roof is suitable for a maximum span of 2.5 meters. The side roof is used to cover the verandah of a building and it is also known as one side roof.

A couple Roof is the simplest form of a pitched roof. In this roof construction, the common rafters slope upwards from the opposite walls and they meet on a ridge piece in the middle. This form of a pitched roof is a pair of rafters acting like two arms pinned at the top and hence it is called a couple roof. 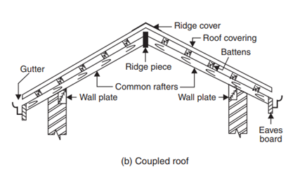 this type of roof is suitable for a maximum span of 3.7 meters and the slope of the rafter should not be less than 40 degrees.

Couple close roof is similar to a couple roof but the legs of the common rafters are closed by a horizontal tie known as a tie beam. This tie beam prevents the rafter from spreading and thrusting out of the wall because it is connected to the feet of the common rafter. These ties are nailed to the rafters and also nailed to the wall plate. This tie beam is made from wood and steel rods.

In this type of roof construction, the joints between the rafter and tie-beam are called dovetail haired. These joints are also called ceiling joists. Ceiling joists are usually 38 or 50 mm thick and 97 to 220 mm deep of softwood.

In couple close roof construction, the ties are just spiked to the rafters. Under normal loading conditions, these types of roofs can be used for a maximum span of 4.5 m but the increased spans or greater load, the rafters tend to sag in the middle.

This roof framing has nothing but rafters and a tie beam at the bottoms of the rafters. The next step in the development of roof framing was to add a collar, called a collar beam roof. Collar beam roofs are suitable for spans up to around (4.5 meters). 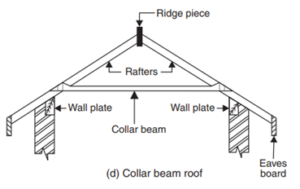 (B) Double or Purlin Roofs:

If span exceeds, the cost of rafters increases, and a single roof becomes uneconomical. For spans, more than 5 m double purlin roofs are preferred. The intermediate support is given to rafters by purlins supported over collar beams. 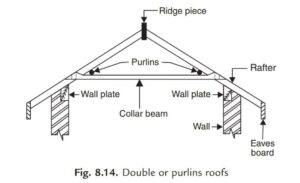 These roofs have two basic elements: i) rafters and ii) purlins The purlins give intermediate support to the rafters, and are supported on end walls. The intermediate supports so provided in the form of purlins, reduce the size of the rafters to the economical range. Such a roof is also known as a rafter and purlin roof. The rafters are provided fairly close (40 to 60 cm c/c). Each rafter is thus supported at three points i) at the bottom, on the wall through wall plate ii) at the top, by the ridge beam, and iii) at the center by a purlin. By supporting the rafter at its mid-point with a purlin, the span is halved, thus enabling the rafter to be made considerably lighter than it would need to be if it spanned the whole distance from eaves to the ridge. For larger roofs, two or more purlins may be provided to support each rafter.

If the span is more, a framework of slender members is used to support sloping roofs. These frames are known as trusses.

Several trusses may be placed lengthwise to get wall-free longer halls. Purlins are provided over the trusses which in turn support roof sheets. For spans, up to 9 m wooden trusses may be used but for larger spans, steel trusses are a must. In the case of wooden trusses, suitable carpentry joints are made to connect various members at a joint. Bolts and straps are also used. In the case of steel trusses joints are made using gusset plates and by providing bolts or rivets or welding.

A king post (or king-post or kingpost) is a central vertical post used in architectural or bridge designs, working in tension to support a beam below from a truss apex above (whereas a crown post, though visually similar, supports items above from the beam below).

it is used spans up to 8m 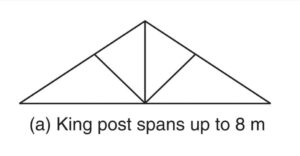 The wooden queen post truss differs from a king-post truss in having two wooden uprights or vertical members which are known as queen post. In this roof, Queen – posts are used instead of king post. 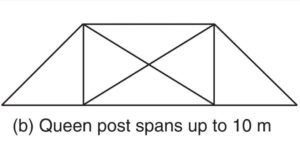 it is used where to span up to 10m

A truss bridge is a bridge whose load-bearing superstructure is composed of a truss, a structure of connected elements, usually forming triangular units. The connected elements (typically straight) may be stressed from tension, compression, or sometimes both in response to dynamic loads.

With Fink or Fan trusses inclining the rafter not exceeding 30 degrees it is more economical to employ a horizontal chord or tie since it obviates bending of the laterals. Raising the bottom chord, also materially increases the strains in the truss members, hence it increases the cost.

Fan trusses are forms of Fink roof truss. In Fan Trusses, top chords are divided into small lengths to provide supports for purlins which would not come at joints in Fink trusses. It can be used for spans from 10-15m. 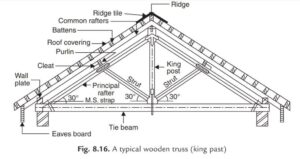 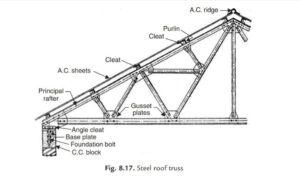 These Are Following Major Parts of Pitched Roofs.

Roofs generally fall into 1 of 4 categories.

• Shallow Pitched Roofs: Under 25 degrees is considered a shallow roof, Shallow roofs can require additional maintenance and can narrow available tile style selections to specialist forms designed to withstand a shallow angle. • Conventional Pitch Roofs: Anything between 25 degrees and 47.5 degrees would be considered a conventional pitch truss. These are the easiest to construct and maintain.

• Flat Roofs: In reality, flat pitched roofs are not flat. All flat pitched roofs generally contain a fairing or wedge (like cheese!) that gives one side of the roof a little more height than the other. This can lead to a pitch of between 2 – 5 degrees. Without this fairing, a flat roof would not be able to dispel water and would leak.

Shaped like a triangle, they are stable and far more effective when dealing with excessive weather, including heavy rain and snowfall. The roof design helps to direct the water away from the home and leaves little chance of waterlogging.

The natural ventilation underneath the top roof layer significantly improves the thermal efficiency of a building. This ensures optimal indoor comfort both in winter and summer.

The building envelope is responsible for around 25-35% loss of energy within a building. Pitched roofs are built to allow natural ventilation between the outer layer and the building, preserving energy.

Some roofing tiles have sustainable credentials to integrate solar panels within the structure of pitched roofs.

Flat roofs require constant maintenance of their drainage systems to avoid leaking. While pitched roofs are more expensive, cheaper and less frequent repairs compensate for this. This is especially true if the roof is covered in high-quality natural slate, with a lifespan of over 100 years and no need for any maintenance.

The pitched roof makes it easier to reuse rainwater than flat roofs. The external drainage system is easier to modify and maintain.

Pitched roofs can be converted to house substantial extra living space inside.

The followings are the disadvantages of the pitched roof system: