Population forecasting in environmental engineering is very important to know the growth rate and estimate the future population of a particular area.

The design population is estimated because of all the factors that control future growth and development. project areas in industrial, commercial, educational, social, and administrative sectors.

This method is based on the assumption that the population is increasing at a constant rate. The rate of change of population remains constant over time.

t = number of decades between P1 and P2

The arithmetic mean is slightly higher than the geometric mean.

Also, r can be calculated as

Note: In the geometric method, computing is done every decade

This method is an improvement over the above two methods. Average growth in population is determined by the arithmetic method and the average of net incremental growth is added once for each future decade.

The incremental increase method is the best method for population forecasting.

This method is applicable only in cases where the rate of growth shows a downward manner.

In this method, a graph is plotted from the available data, between time and population. The curve is then smoothly extended up to the desired year. 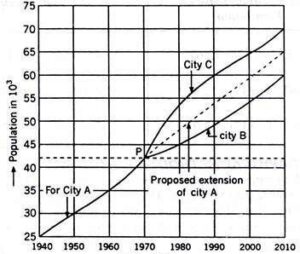 In this method, cities with similar conditions and characteristics to the city whose future population is to be estimated are first selected. It is then assumed that the city in question will develop as selected similar cities have developed in the past. This method has a logical background, and fairly accurate and reliable results can be obtained if development data for similar cities are available.

It is very easy to access precisely the design population because the master plan will give us when and where the given number of houses, industries, and commercial establishments would be developed.

A master plan is prepared for the development of cities for 25-30 years. The population density is also determined for different zones of the cities to be developed. Now that the population of a particular area is fixed, it is very easy to design water supply plans for particular areas. The future development of the waterworks is also designed based on the master plan.

The local population and the country population for the last four or five decades are obtained from the census method. 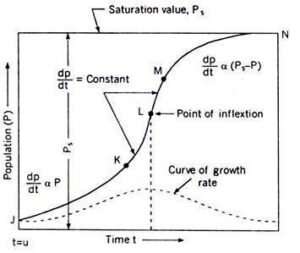 The equation of the logistic curve is

• If only three pairs of characteristic values Po, P1, P2 at time t = t0 = 0, t1and t2 = 2t1 extending over the useful range of the census population are chosen, then

Note:
(i) Methods 1 to 5 are based on the assumption that factors and conditions which were responsible for population increase in the past and continue even in the future also, with the intensity. This is a vague assumption.

(ii) Methods 6 to 9 are advanced and time-consuming methods that give fair results.

(iii) None of these methods is exact, and they are all based on the laws of probability, and thus, only for possible future approximate estimation population can be made.