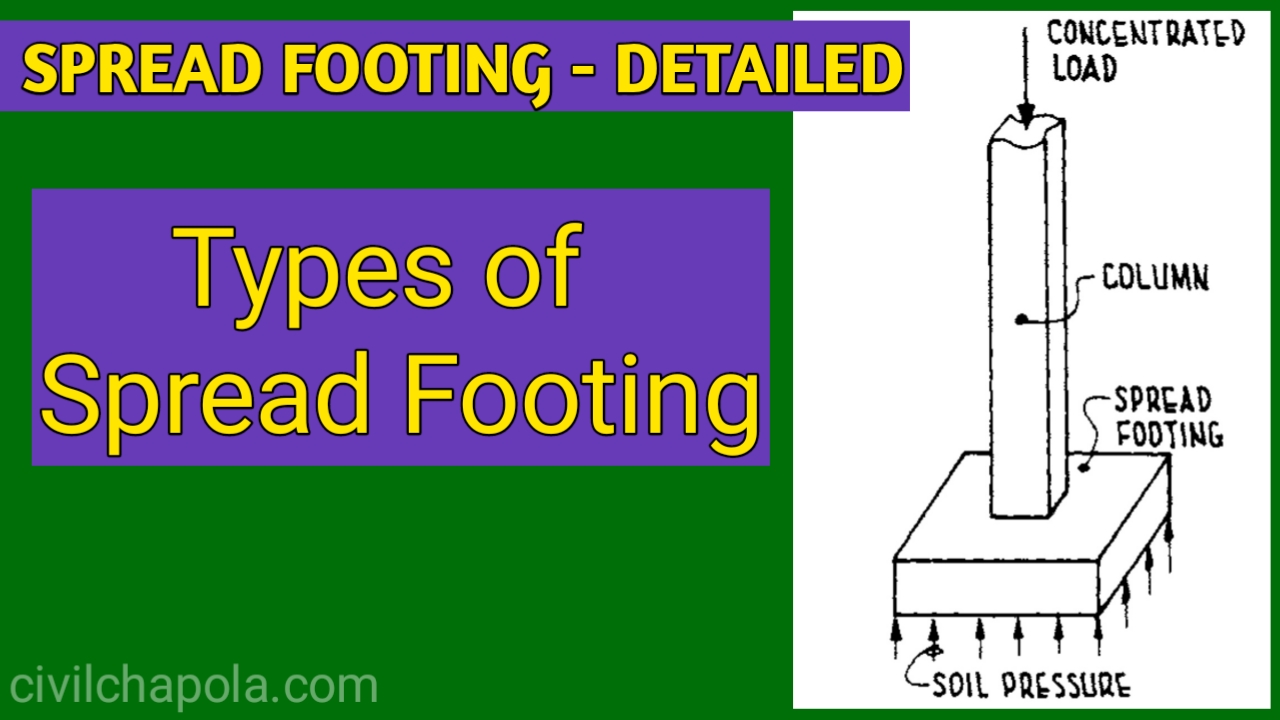 The Most Common Types of Shallow Foundation Fall Into Three Descriptions:

What is Spread Footing Foundation:

Spread footing in construction is a type of shallow foundation which is also known as Isolated footings. these footings are provided under each column or shear wall individually. it is a simple type of footing.

Isolated spread footing should always be centered at the bottom column. Loads applied off-center can produce useless high peaks in the soil. Pressure has to be taken and it should be avoided. Where a row of two or more columns is placed on a rung, the required symmetry is obviously reduced to just one axis.

The contact area of ​​a spread footing is placed at a specified distance below the surface level. That distance is called the depth of the foundation and is represented by Df.

unreinforced spread footings with stepped sides and sloped sides. The stepped sides are easier to form and cast but require slightly more concrete. With the 45° slope, there is no tension in the concrete and no need for reinforcement except for occasional dowels.

How Deep is a Footing?

Maximum depth of foundation that can be used and is still a base What is classified as a “shallow” foundation is fairly arbitrary. important changes begin are found in soil at depths greater than about 6 to 8 feet; Such changes are caused by For both higher limiting pressure and more stable moisture content. and, for foundation construction, a practical limit for disjointed or open excavation is also about 8 feet. Because of such considerations, a maximum depth of about eight feet is considered arbitrary but reasonable here. The limit on the depth of the founder df.

When there is no lateral load, the maximum gravitational load that can be carried on a foot is simply the sum of the maximum dead load and maximum live load, which is denoted as DL + LL in all subsequent discussions. The soil should have sufficient strength to Support this maximum load, no matter how often.

Footings are designed to support the vertical gravity loads under the following conditions:

A raft foundation, also called a mat foundation, is essentially a continuous slab resting on the ground that spans the entire building footprint, supporting the building and transferring its weight to the ground.

A raft foundation is actually a merged footing that covers the entire area under a structure and holds all the walls and pillars.

In this foundation one R.C.C. The slab is provided with a beam or without a beam of suitable thickness.

Wall footing or strip footing is a continuous strip of concrete that serves to spread the weight of a load-bearing wall over an entire area of clay.

It is a shallow base component. Wall footings that carry a direct vertical load can be designed in either plain concrete or reinforced concrete.

Wall footings are often either simple or steeped. Wall footing can be further classified into two types:

Isolated footing is a single or individual footing that transfers loads to underground soil. This is provided when a single column is to be provided. A foundation is the part of the substructure that contacts or rests directly on the ground.

This isolated footing is further classified into 3 types:-

When two or more columns have to be accommodated in separate footings or in exceptional cases, it is known as combined footing or when two or three pillars are located very close to each other, we and the footing is known as composite footing base.

This type of footing is constructed when two or more columns are available in a row.

Strap footing is a type of combined footing, consisting of two or more column footings connected by a concrete beam. This type of beam is called a strap beam.

Strap footing is a combination of two or more separate footings that are attached to a strap beam. It is also sometimes called cantilever footing or pump handle foundation.

A continuous footing is one that supports more than two pillars. The footing is similar to strip footing for a wall. Loads from individual pillars are transferred either directly to the footing slab, or through longitudinal beams running longitudinally when the load is heavier.

This type of foundation is installed in places where the bearing capacity of the soil is extremely poor and the load of the structure is concentrated on the walls and deep excavation is not possible.

A foundation for grilling is a foundation consisting of one, two, or more layers of beams (usually steel) mounted on a concrete layer to spread the load over a large area. This type of foundation is generally used for pillars and column scaffolds having a heavy structure.

Limitations or Disadvantages of Spread Footing: