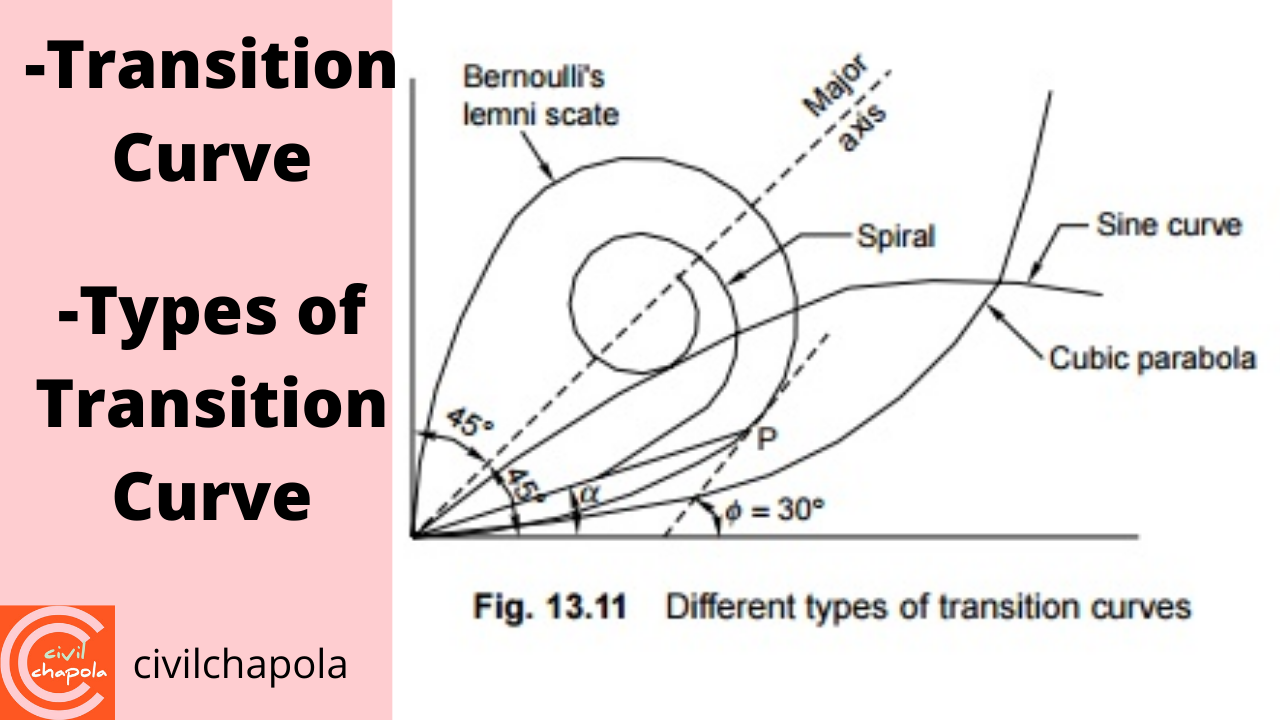 What Is Transition Curves in Highway:

When a vehicle traveling on a straight road enters into a horizontal curve instantaneously, it will cause
Discomfort to the driver. To avoid this, it is required to provide a transition curve. This may be provided either
between a tangent and a circular curve or between two branches of a compound or reverse curve.

The objectives of providing a transition curve are:
(i) To gradually introduce the centrifugal force between a straight and circular curve
(ii) To avoid a certain jerk.
(iii) To the gradual introduction of superelevation and extra widening.
(iv) To enable the driver to turn the steering gradually for comfort and security
(v) To improve aesthetic appearance.

A Transition curve should satisfy the following conditions:

The length of transition curve required on a horizontal highway curve depends upon the following
Factors:
(i) Radius of the circular curve. R
(ii) Design speed, V
(iii) Allowable rate of change of centrifugal acceleration, C
(iv) Maximum amount of super elevation which depends on the maximum rate of superelevation.
and the total width of the pavement, B at the horizontal curve.
(v) Allowable rate of introduction of superelevation.
(vi) Rotation of pavement cross-section either about the inner edge or the centre line.

The types of transition curves commonly adopted in horizontal alignment of highways are:
(i) Spiral or Clothold
(ii) Bernoulli’s Lemniscale
(iii) Cubic Parabola

The general shapes of these three curves are shown in Figure. All the three curves follow almost the same path upto deflection angle of 40, and practically there is no significant difference even up to 9º. In all these curves, the radius decreases as the length increases. 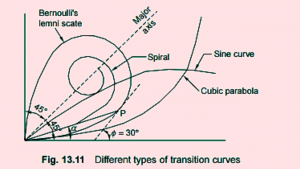 The length of the transition curve is designed to fulfill three conditions i.e.,
(i) rate of change of centrifugal acceleration to be developed gradually
(ii) rate of introduction of the designed superelevation to be at a reasonable rate, and
(iii) minimum length by IRC empirical formula

The length of the transition curve fulfilling all the three conditions (or the highest of the three values) is
generally accepted.

(i) When pavement is rotated about the inner edge

(ii) When pavement is rotated about the center

Empirical Formula for the Length of Transition Curve Recommended by IRC

For plain and rolling terrain,

For mountainous and steep terrain,

The design steps for the transition curve in horizontal alignment are given below:

Setting out of Transition Curve:

The shift (S) of a circular curve is given by

There are two cases in the calculation of setback distance:

Case-1: When the length of a horizontal curve is greater than the sight distance (Lc > SD)

(b) For Multi Lane:
Let 2d is the total width of a lane, then setback distance from the center line of the road having only two-lane is given as

Similarly, for a road of ‘n’ lanes, setback distance is given by

Case-2: When the length of a horizontal curve is less than the sight distance (Ls < SD).

(a) For Single Lane:
Hence, the setback distance from the centre line of the road is

(b) For Two-Lane:
The setback distance from the centre line of the road

The setback distance from centre line of the inner lane is