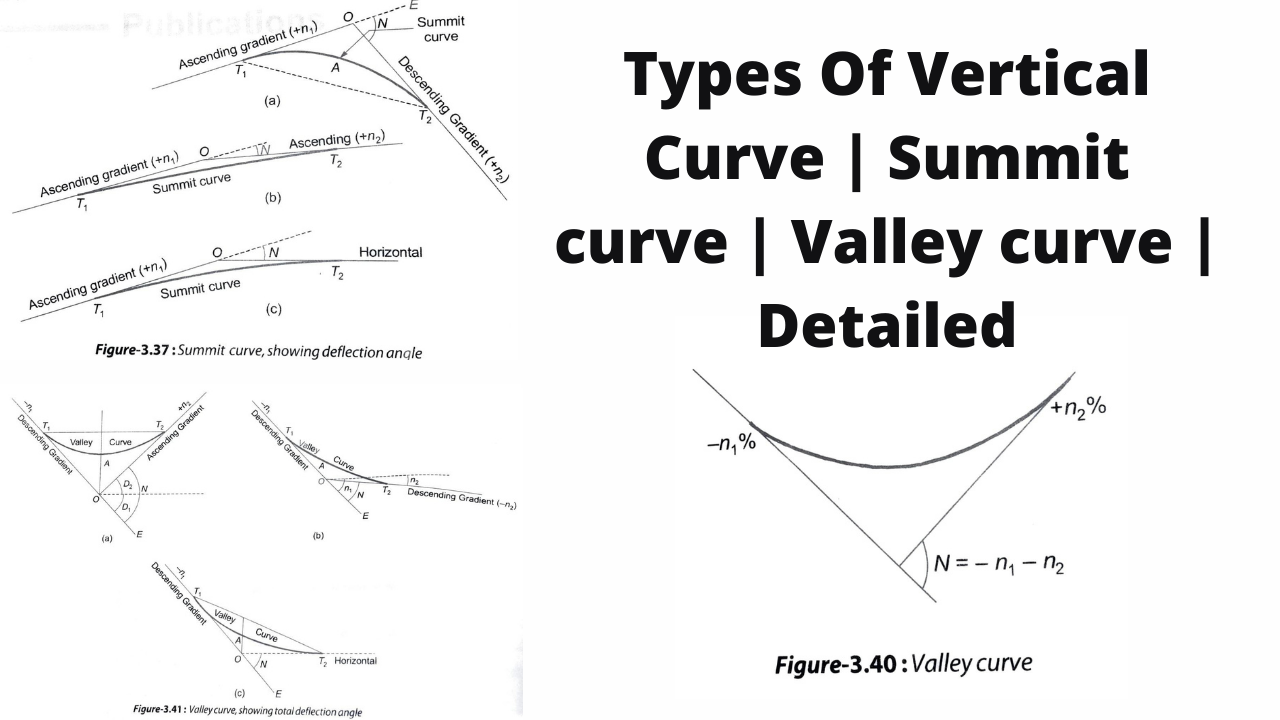 (i) Accident due to inadequate visibility on a high and blind culvert over which roads profile has not
boon is properly designed as a vertical curve.
(ii) Discomfort and damage due to humps and trough, although these may not be a source of accidents
but they make traveling very uncomfortable
(iii) It is much cheaper and easier to construct good curves in the first instance than to set the right road
curves later on The minimum length of the vertical curve as per the IRC recommendations are given in Table

The vertical curves are of two types; 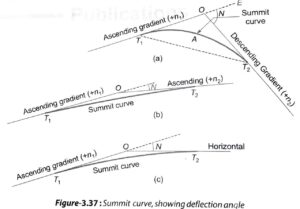 Square parabola is the best shape for summit curve due to good riding qualities, Simplicity of calculation work and uniform rate of change of grade. An ideal shape for a summit curve is circular because the sight distance available throughout the curve is constant.

Generally, there is no problem of discomfort on the summit curve because gravity force acts download and a centrifugal force acts upwards, part of pressure in the tyre is released Length of summit curve depends only
on sight distance (SSD.ISD and OSD).

Thus deviation angle of a summit curve is the angle that measures the change of direction in the path
of motion at the intersection of two grade lines.

(i) the deviation angle, N          (ii) the required sight distance
In determining the length of the summit curve, two cases have to be considered

Case-1: When the length of the curve exceeds the required sight distance i.e., L>S.

Case-2: When the length of the curve is less than the required sight distance, i.e., L<S.

The length of the summit curve is given as, 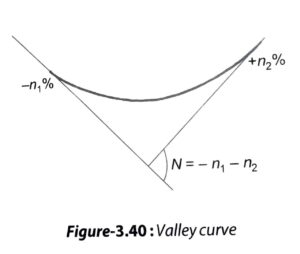 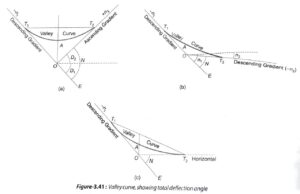 A valley curve is usually made up of two transition curves of equal length without having a circular curve in
between. Cubic parabola is generally preferred for valley curves to gradually introduce the centrifugal force. In
the valley curve, centrifugal force and gravity force both act downwards, hence creating discomfort for passengers.

As in the case of summit curves, in this case, also deviation angle is the algebraic difference of the two grade angles

NOTE: There are no restrictions to sight distance at valley curve during daw time but at night only source of visibility is with the help of headlights in case of inadequate street lights.

Length of valley curve is designed on the basis of two criteria:

(i) Based on Comfort Condition: In this criteria, the rate of change of centrifugal acceleration is limited to a comfortable zone of about 0.6 m/sec, then the length of the transition curve is given by

(ii) Based on Headlight Sight Distance: