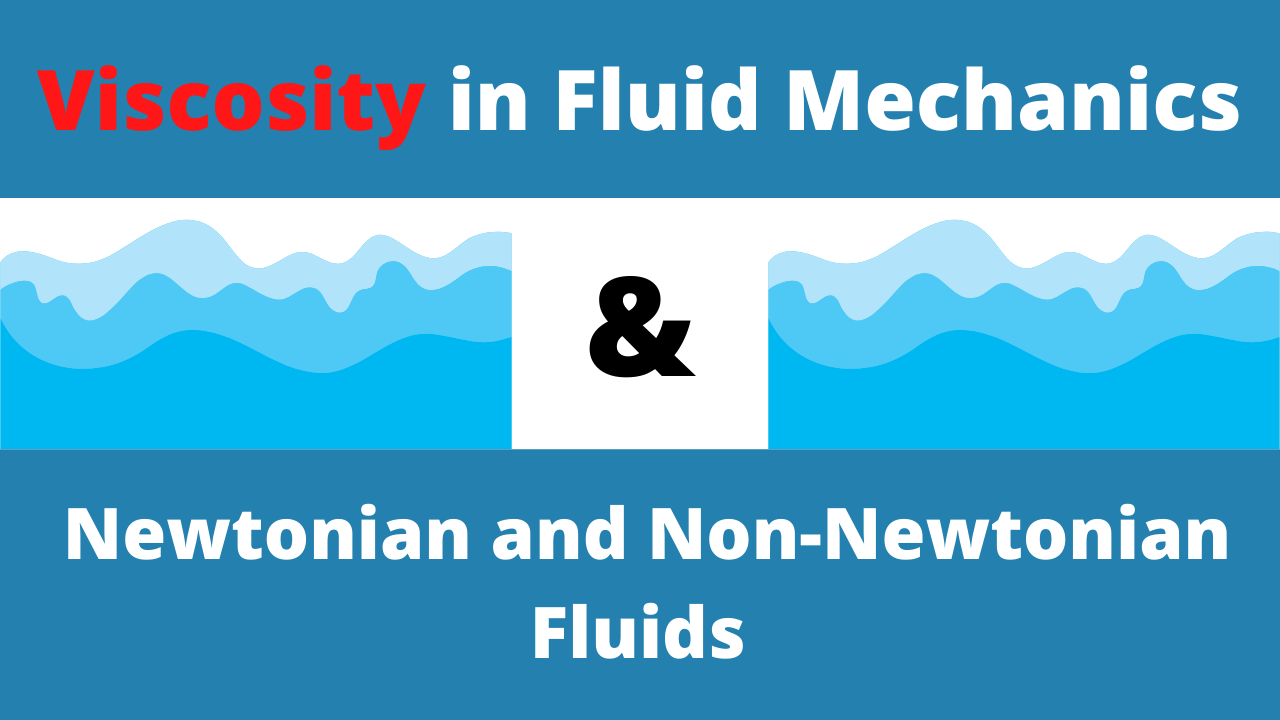 Viscosity in fluid mechanics is a property of the fluids by virtue of which they offer resistance to shear or angular deformation. This is mainly due to cohesion and molecular motion exchange between fluid layers, and as flow occurs, these effects manifest as shear stresses between the moving layers.

It is a measure of the resistance of the fluid to deformation It is duo lo cohesion and molecular momentum exchange between fluid layers and as flow occurs, these effects appear as shoring stressors between the moving layers

Suppose one layer of fluid is moving with respect to the other layer by a velocity du and the vertical gap between the two layers be dy.

The upper layer which is moving faster tries to draw the lower slowly moving layer along with it.

Similarly, as a reaction to this, the lower layer tries to retard the upper one. 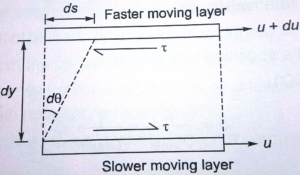 In time dt, the top layer will move with respect to the bottom layer by a distance ds= du.dt

the rate of change of angular deformation is equal to the velocity gradient across the flow.

Based on the relationship between the applied shear stresses and the rate of flow or deformation, fluids can be classified as Newtonian and non-Newtonian fluids.

The fluid that obeys newton’s law of viscosity is known as a Newtonian fluid.

The fluid for which the rate of deformation is linearly proportional to shear stress.

Thus, for a Newtonian fluid

µ = absolute viscosity, “or” coefficient of viscosity “or” dynamic viscosity

water, air, and gasoline are Newtonian under normal conditions.

Note: kinematic viscosity of air is about 15 times greater than the corresponding value of water.

Effect of Temperature on Viscosity: 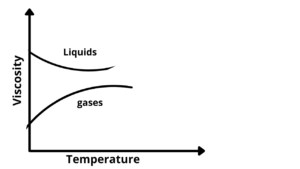 Effect of temperature on dynamic viscosity

In liquid: In the case of liquids temperature increases dynamic viscosity decreases.

In Gases: In the case of gases temperature increases dynamic viscosity increases.

Effect of temperature on kinematic viscosity

In liquid: In the case of liquids temperature increases kinematic viscosity decreases.

In Gases: In the case of gases temperature increases kinematic viscosity increases.

Effect of Pressure on Viscosity:

For liquid, viscosity is practically independent of pressure except at extremely high pressure. so when increases pressure dynamic viscosity and kinematic viscosity will remain the same for liquid.

Fluids for which shear stress is not directly proportional to deformation rate are non-Newtonian. Non-Newtonian fluids commonly are classified as having time-independent time-dependent behavior.

They do not obey Newton’s law of viscosity.

Toothpaste and paint are examples of non-Newtonian fluids.

Various Types of Non-Newtonian Fluids Are:

1. Pseudoplastic: Fluids in which the apparent viscosity decreases with increasing deformation rate ( n< 1) are called pseudoplastic fluids (or shear thinning) Most non-Newtonian fluids fall into this group.

2. Dilatant: If the apparent viscosity increases with increasing deformation rate (n>1), the fluid is termed as dilatant (or shear-thickening)

3. Bingham Plastic: Fluids that behave as a solid until minimum yield stress, and flow after crossing this limit are known as ideal plastic or Bingham plastic. The corresponding shear stress model is τ = τ y + du/dy

Note:
(i) There is no relative movement between fluid attached to the solid boundary and solid boundary i.e. the fluid layer just adjacent to the solid surface will have the same velocity as the solid surface.
(ii) Viscoelastic: Fluids which after some deformation partially return to their original shape when the applied stress is released such fluids are called viscoelastic.
(iii) Rheology: Branch of science that deals with the studies of different types of fluid behaviors.