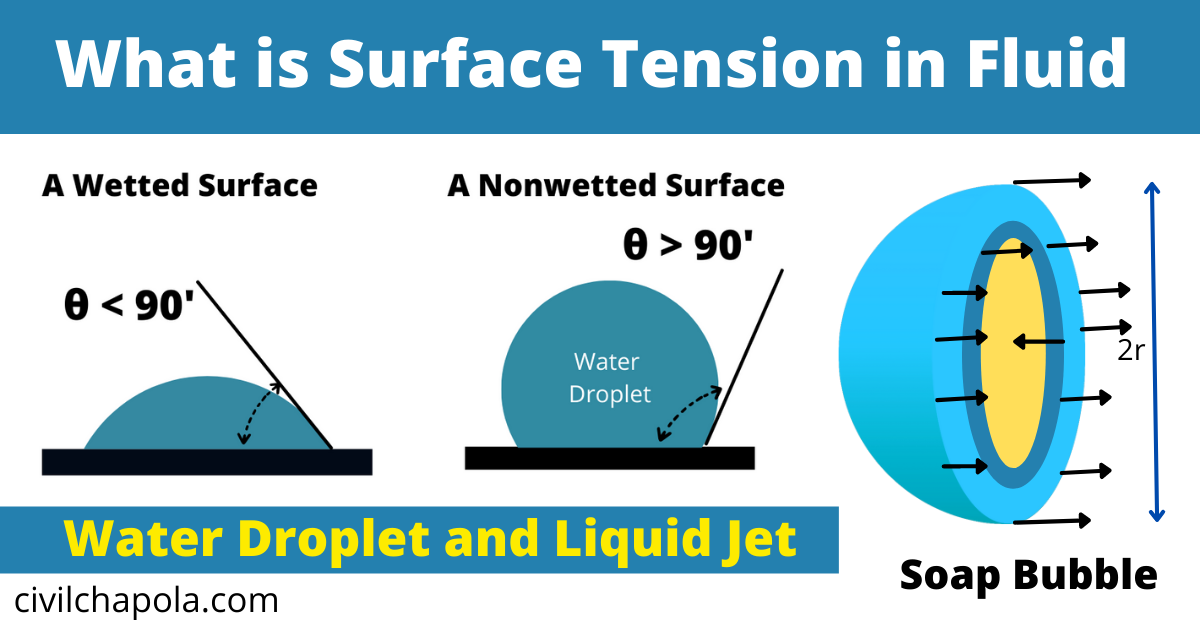 Surface tension is caused by the “cohesion” between the liquid particles and the surface. Whenever a liquid is in contact with other liquids or gases, or a solid surface, an interface develops that acts like a stretched elastic membrane, creating surface tension.

Cohesion: The force of attraction between the molecules of the same liquid.

Adhesion: The force of attraction between molecules of different liquids (or) between liquid molecules and the solid boundary containing the liquid. 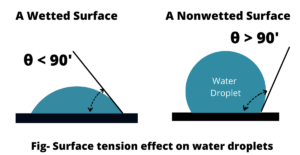 For liquids, surface tension decreases with increase in temperature. Due to this surface tension, the liquid droplets take the form of a sphere, which is the size for the minimum surface area.

Surface tension is a measure of a liquid’s tendency to take a spherical shape due to the mutual attraction of liquid molecules.

When a droplet is initially detached from the surface of the main body of the liquid, a net inward force is exerted on the entire surface of the droplet due to the face tension, which causes the droplet surface to dissipate from all droplets. contact occurs. side and result in an increase in the internal pressure within the droplet.

The droplet contraction continues until the inward force due to surface tension is in equilibrium with the internal pressure and the droplet forms a sphere that is the size for the minimum surface area.

The internal pressure within the jet of the liquid also increases due to surface tension.

1. Pressure Intensity inside a droplet: 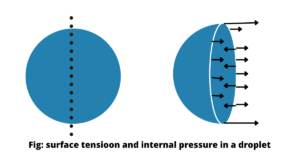 If the droplet is cut into two halves, then the forces acting on one half will be those due to pressure intensity (p) on the projected area {πr^2} and the tensile force due to surface tension (σ) acting around the circumference (2πr) These two forces will be equal and opposite for equilibrium and hence we have,

The above equation indicates that the internal pressure intensity increase with the decrease in the size of the droplet.

2. Pressure intensity inside a soap bubble: 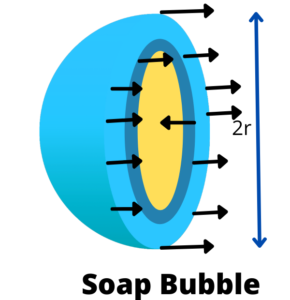 However, the pressing force acting on the hemispherical section of a soap bubble is the same as in the case of a drop and is equal to p(πr^2). Thus equating these two forces for equilibrium, we get,

3. Pressure intensity inside a liquid jet:

If the jet is cut into two halves, then the force acting on one half is the intensity p of the pressure on the projected area (2rl) and the tensile force (2l) due to surface tension (σ) acting along both sides Will be, For equilibrium both these forces will be equal and opposite and hence we have,