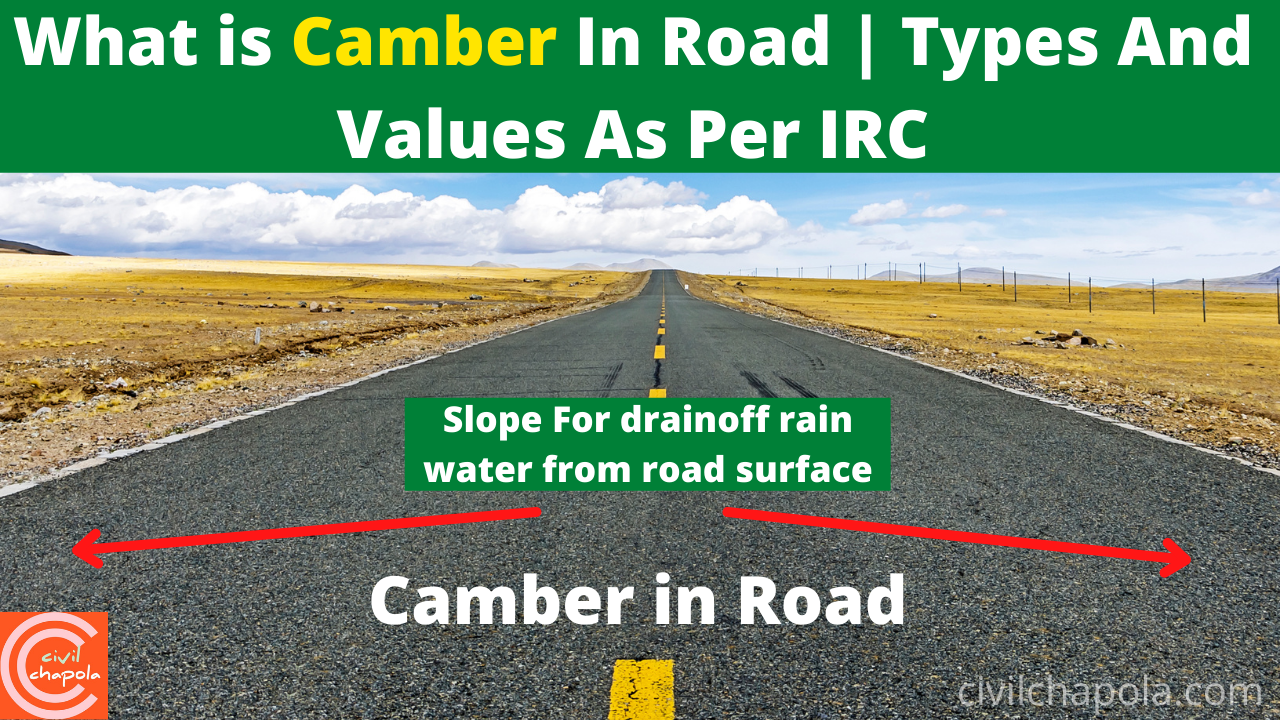 Camber in the road is the transverse slope provided to the road to drain off rainwater from the road surface is known as camber in road.

Camber may be provided in the shape of parabolic, elliptic, or straight-line shape For cement concrete pavement straight line camber is provided while parabolic and elliptic shapes are preferred by fast-moving vehicles because they require the frequent crossing of the crown line during overtaking operation.

It is measured in 1 in ‘n or n% (e.g. 1 in 50 or 2%). advantage of providing camber is quick-drying of pavement which in turn increases safety and subgrade protection by drainage.

The camber of the shoulder should be at least 0.5% steeper than the cross slope of adjoining pavement subjected to a minimum of 3.0% and a maximum value of 5.0%.

The Requirement of The Camber of A Pavement Depends:

(i) Type of pavement surface
(ii) The amount of rainfall

Recommended Values of Camber in Road As Per IRC:

Types of Camber in Road:

Mainly These Types of Camber We Use In Road Construction,

This type of camber is provided by meeting two straight surfaces in the crown. The crown is the central and highest point on the road surface.

The edge shape causes inconvenience to traffic, so it is not commonly used.

In this, both the straight lines are vertical near the edges and are flattened near the crown. This type of camel is considered best for Indian roads.

It includes a continuous curve, either parabolic or elliptical. This type of camel is ideal for roads used by high-speed vehicles.

Quick-drying of pavement which in turn increases safety and subgrade protection by drainage.

Protect the road by preventing surface water from entering the soil below through the pavement.

Camber in the road is used to remove rainwater from the pavement surface as soon as possible and allow the pavement to dry quickly after rain.

Advantages of Camber in Road:

Disadvantages of Excessive Camber in Road:

NOTE: Gradient provided for pavement is considered as twice of camber.