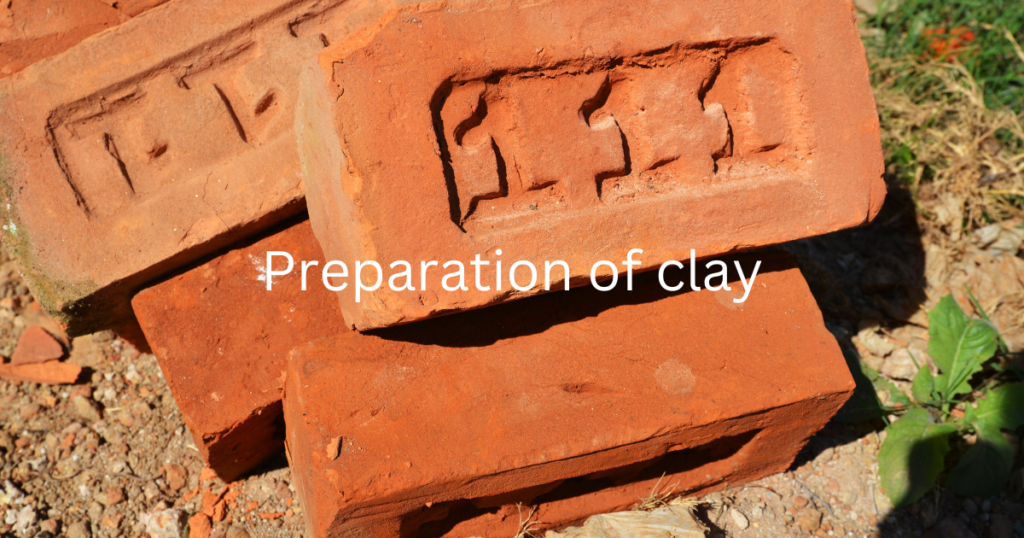 Clay of bricks is prepared in the following order:

(i) Unsoiling: The top layer of soil, about 20 cm in depth, is taken out and thrown away.

(ii) Digging: Clay is then dug out from the ground. It is spread on the levelled ground. The height of heaps of clay is about 60 cm to 120 cm.

(iv) Weathering: Clay is then exposed to the atmosphere for softening or mellowing. The period of exposure
varies from a few weeks to a full season.

(v) Blending: Clay is made loose and any ingredient to be added to it is spread out at its top. It is carried out by taking a small portion of clay every time and by turning it up and down in vertical
direction.

(vi) Tempering: In the process of tempering, clay is brought to a proper degree of hardness and it is made fit for the next operation of moulding.

Water in the required quantity is added to clay and the whole mass is kneaded or pressed under the feet of men or cattle. Tempering should be done exhaustively to obtain a homogeneous mass of clay of uniform consistency. For manufacturing good bricks on a large scale, tempering is usually done in a Pug mill. The diameter of the pug mill at the bottom is about 80 cm and that at the top is about one metre.

NOTE: The process of grinding clay with water and making it plastic is known as pugging. 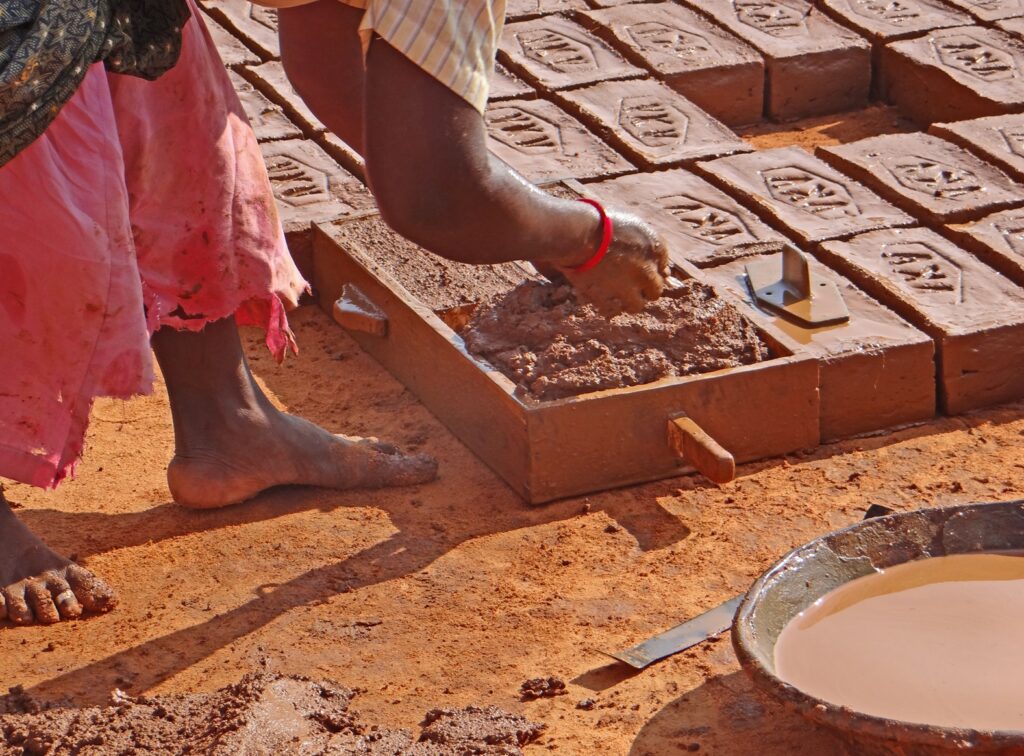 The clay which is prepared as above is sent for the next operation of moulding. Two types of moulding are hand moulding and machine moulding.

NOTE: The wire-cut and pressed bricks have a regular shape, sharp edges and corners. They have smooth external surfaces. They are heavier and stronger than ordinary hand-moulded bricks. They carry distinct frogs and exhibit uniform dense textures.

(i) If bricks are cooled after attaining the temperature of about 650°C, the bricks formed will absorb moisture from the air and get rehydrated.

(ii) The reactions between the mineral constituents of clay are achieved at higher temperatures and these reactions are necessary to give new properties such as strength, hardness and low moisture absorption. 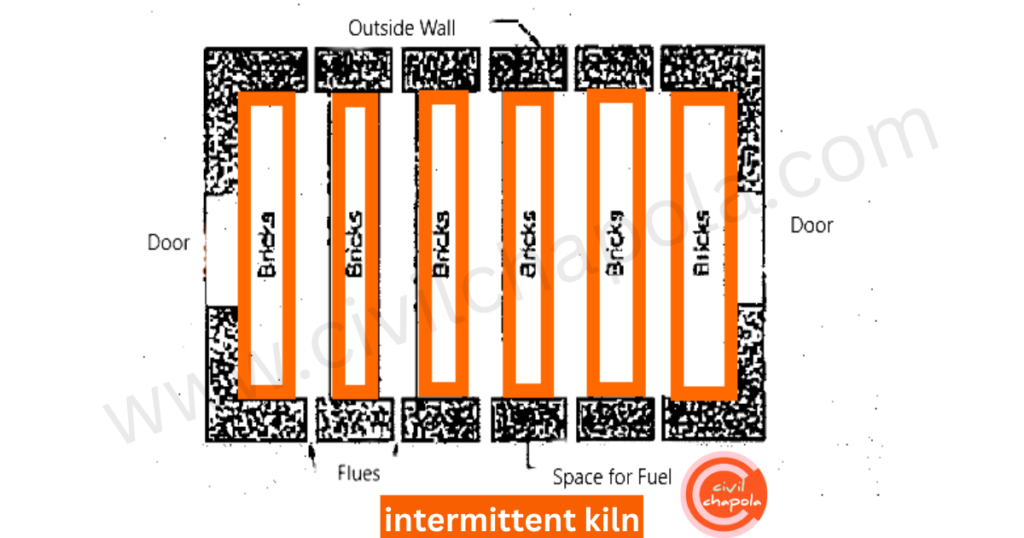 Continuous Kilns:
These kilns are continuous in operation. This means that loading, firing, cooling and unloading are carried out simultaneously in these. There are various types of continuous kilns.
(a) Bull’s Trench kiln        (b) Hoffman’s kiln          (c) Tunnel kiln 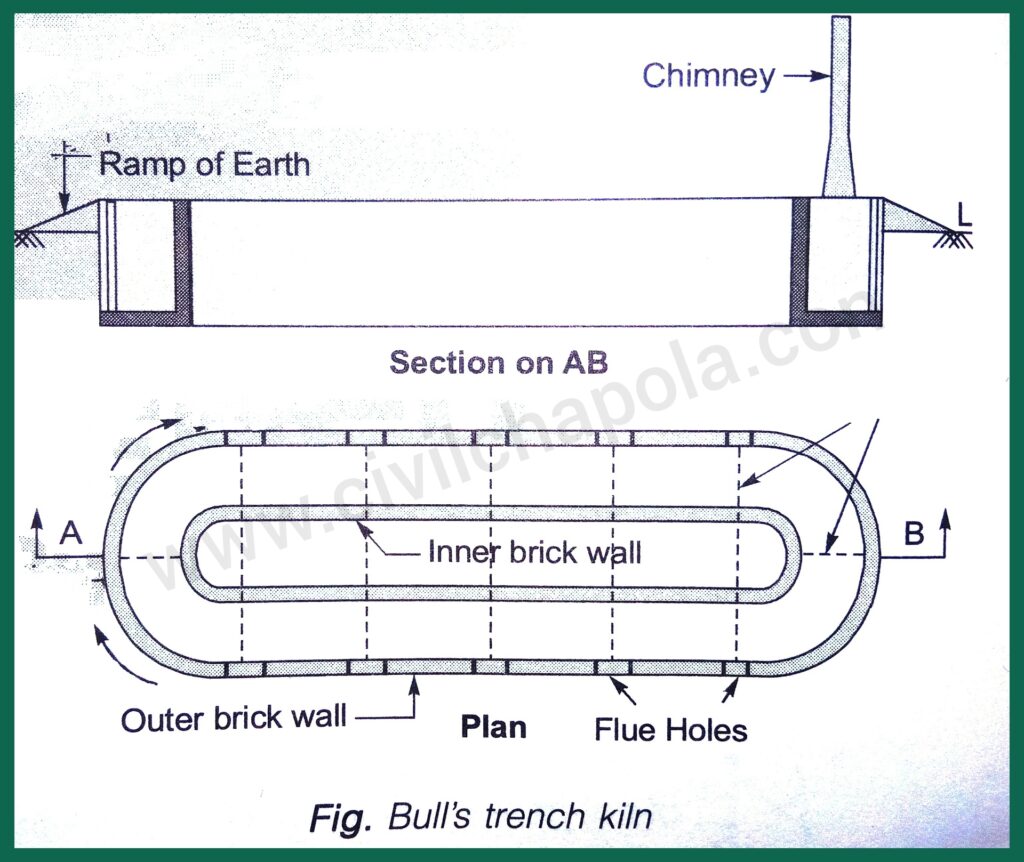 Hoffman’s Kiln: This kiln is constructed over ground and hence, it is sometimes known as a flame kiln. Its
the shape is circular in plan and it is divided into a number of compartments or chambers. 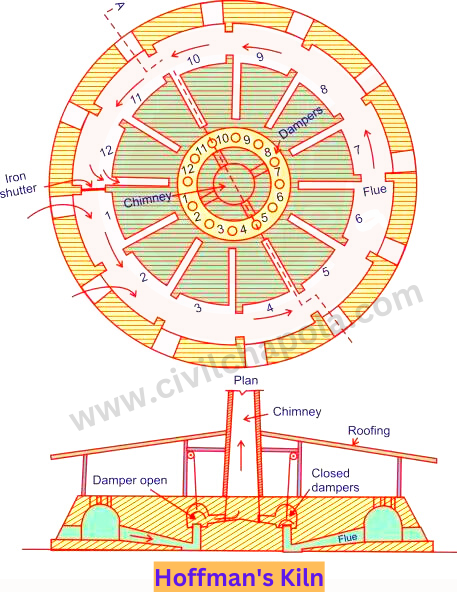 Since it is provided with a permanent roof, the kiln can even function during the rainy season.
The figure shows the plan and section of Hoffman’s kiln with 12 chambers. Each chamber is provided with the following:

The main doors are closed with dry bricks and covered with mud when required.