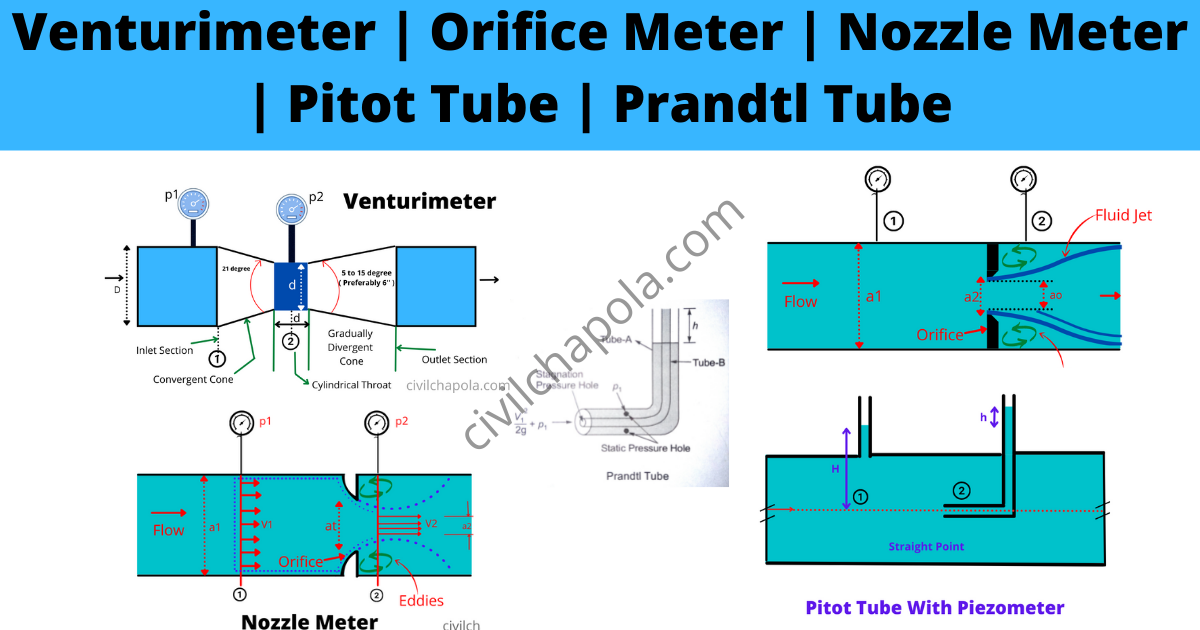 Venturimeter is a device used for measuring the rate of flow of fluid through pipe Principle: By reducing the cross-sectional area of the flow passage, a pressure difference enables the determination of discharge through the pipe. The geometry of venturimeter is as shown in Figure. 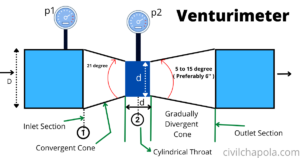 Let at the inlet and throat a, and a be the cross-sectional areas. p, and be the pressures, V, and V are velocities respectively. Then by applying Bernoulli’s equation between sections (1) and (2) we get, be the

But h= Difference between pressure heads known as Venturi head.

Then, Qth = Theoretical discharge through pipe, then by continuity equation,

If, Cd is the coefficient of discharge, then, the actual discharge is given by

In general, for fluids of low viscosity, a value of 0.98 is adopted for Cd.

In the venturi meter, as we have a gradual contraction and gradual expansion, there is no flow separation and hence a can be taken as a complete area of the throat.

Since the separation of flow may occur in the divergent cone of venturimeter, this portion is not used for discharge measurement.

If the cross-sectional area of the throat is so much reduced that pressure drops below vapour pressure of flowing fluid, cavitation may occur. Hence, to avoid the phenomenon of cavitation the diameter of the throat can be reduced only up to a certain limited value.

NOTE: Venturimeter can also be used for measuring the discharge through a pipe which is laid either in an
inclined or in a vertical position. 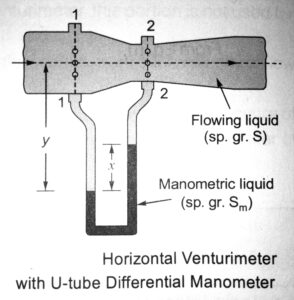 Let Sm and S(Sm>S) are the specific gravities of the manometric liquid and the liquid flowing in the venturi meter, respectively 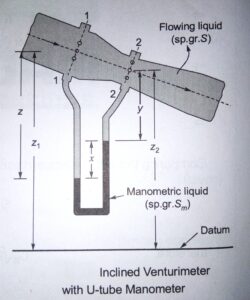 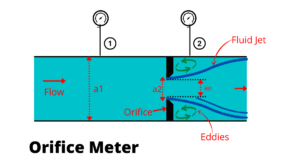 This device is used for measuring discharge through pipes, which works on the same principle as a venturimeter.

However, an orifice meter is a cheaper arrangement.

As such, where the space is limited, the orifice meter may be used for the measurement of discharge through pipes.

An orifice meter consists of a flat circular plate with a circular hole called an orifice, which is concentric with the pipe axis.

Coefficient of discharge of orifice meter may be given as: 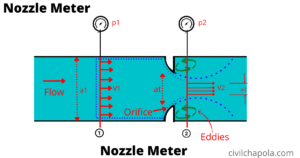 This is similar to the venturi meter except in the nozzle meter, the diverging cone is not provided.

In this, a contraction with a well-rounded entrance is placed in the pipeline. This flow nozzle is simpler than the venturi meter and can be installed between the flanges of a pipeline.

The discharge equation for the flow nozzle is the same as for the venturi meter, however, in this case, the coefficient of contraction Cc=1. 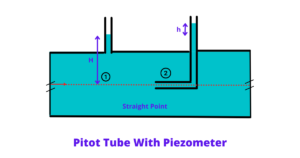 the pitot tube is a device for measuring the velocity of flow.

Basic Principle: The velocity of flow at a particular point is reduced to zero, which is known as the stagnation point.

Applying Bernoulli’s equation between points 1 and 2. velocity at point 1,

where Cv= coefficient of velocity= 0.98 for pitot tube. 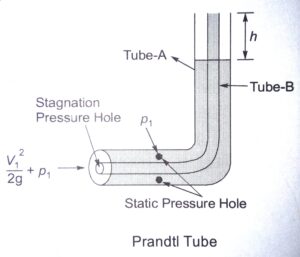 This is also used to measure velocity at a point in fluid flow.

Hence, we use a Prandtl tube or pitot-static tube which satisfies the above purpose.

Pitot static tube or Prandtl tube can also be used if the boundary surface at 2′ is rough such that pressure measurement at ‘2’ can not be correctly done.

The front portion of the tube is rounded to avoid separation of flow and on its shaft, holes are provided at a certain distance where streamlines become parallel.

To account for losses, we use the coefficient of velocity. Hence actual velocity at ‘1’ is