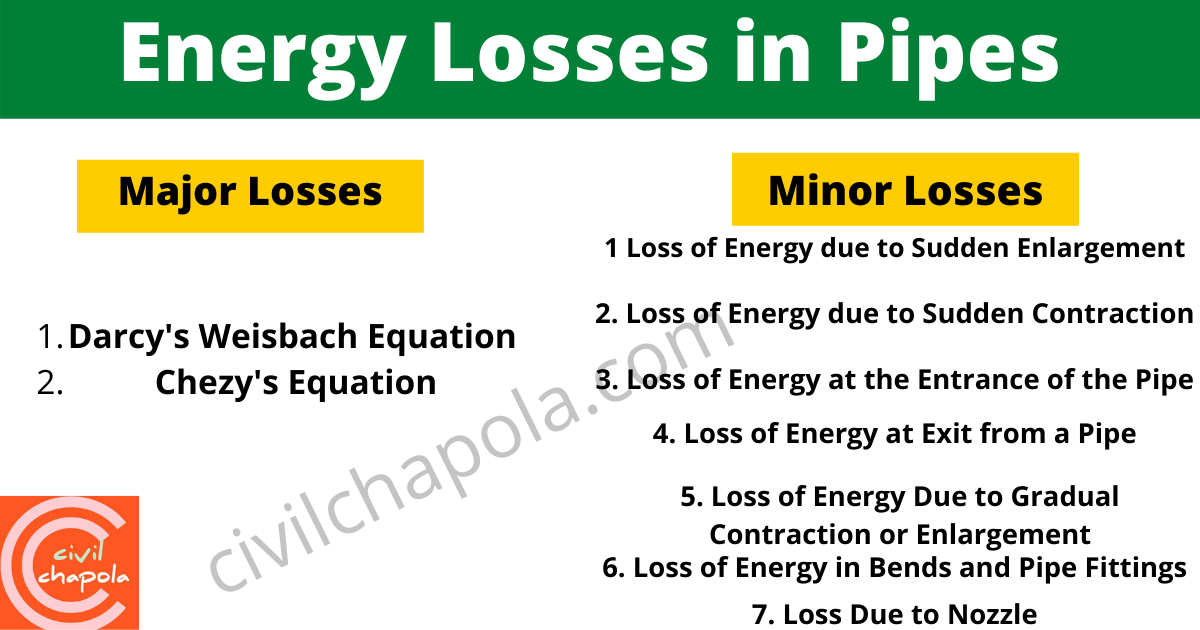 As liquid flows through a pipe specific resistance is offered to the flowing fluid, resulting in energy loss.

The Energy Losses in Pipe May Be Classified As:

A. Major Losses in Pipe

Major losses are caused by friction resistance. the head loss is given by

Since the flow is steady and uniform

Where, L= Lenth of the pipeline,   f’ = Friction Coefficient

In the case of pipe flow,

B. Minor Losses in Pipe

The fluid in a typical piping system passes through various fittings, valves, bends, elbows, tees inlets, exits, expansions, and contractions in addition to the straight sections of piping. These components interrupt the smooth flow of the fluid and cause additional losses because of the flow separation and mixing they induce. In a typical system with long pipes, these losses are minor compared to the friction loss in the straight sections (the major losses) and are called minor losses.

In some cases, the minor losses may be greater than the major losses, for example, in systems with several turns and valves in a short distance.

Minor losses are usually expressed in terms of the loss coefficient K. (also called the resistance coefficient), defined as

These are caused on account of changes in the velocity of flowing fluid (either in magnitude or direction).
Following are some of the minor losses which occur in pipe flow

1. Loss of Energy due to Sudden Enlargement 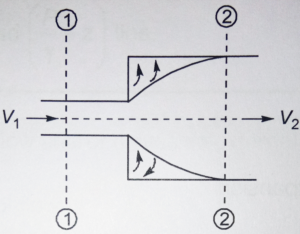 If the cross-section of a pipe flowing through it is abruptly enlarged at a certain place, the fluid emerging from the small pipe is unable to follow the abrupt deviation of the boundary.

The streamline takes a diverging pattern. This creates pockets of turbulent eddies in the corners resulting in the dissipation of mechanical energy into intermolecular energy.

Consider fluid of unit weight g is flowing in a pipe whose area is enlarged at a section as shown in the figure.

The fluid particles near the wall due to their low kinetic energy cannot overcome the adverse pressure hill in the direction of flow and hence follow up the reverse path under the favorable pressure gradient (from p2 to p1).

This creates a zone of recirculating flow with turbulent eddies near the wall of the larger tube at the abrupt change of cross-section resulting in a loss of total energy.

Losses due to sudden expansion can also be expressed as,

2. Loss of Energy due to Sudden Contraction 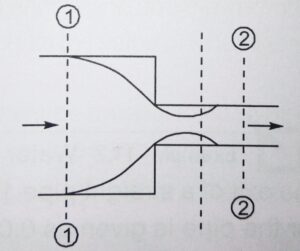 An abrupt contraction is geometrically the reverse of an abrupt enlargement.

The velocity of flow in the converging part of the stream tube from section 1-1 to section c-c (vena contract) increases due to continuity and the pressure decreases in the direction of flow accordingly in compliance with Bernoulli’s theorem.

in an accelerating flow, under a favorable pressure gradient, losses due to separation cannot take place. But in the declaration part of the flow from section c-c to section 2-2 where the stream tube expands to fill the pipe, losses take place in a similar fashion as occur in the case of a sudden geometrical enlargement. Hence eddies are formed between the vena contracta c-c and the downstream section 2-2.

The flow pattern after the vena contracta is similar to that after an abrupt enlargement and the loss of head is thus confined between section c-c to section 2-2.

Variation of K with the sharpness of the edge.

3. Loss of Energy at the Entrance of the Pipe 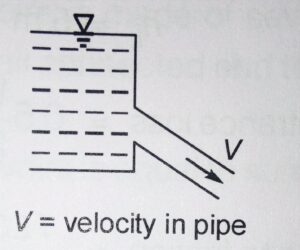 4. Loss of Energy at Exit from a Pipe 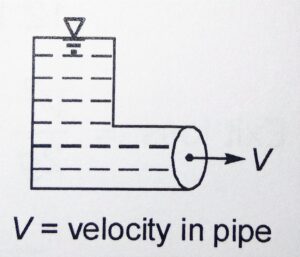 When a pipeline ends to a large reservoir ( A2 → ∞ ), then the head loss at an abrupt enlargement tends to V1²/2g

All the kinetic energy of the flow is lost turned into thermal energy) through friction as the jet decelerates and mixes with ambient fluid downstream of a submerged outlet.

5. Loss of Energy Due to Gradual Contraction or Enlargement

6. Loss of Energy in Bends and Pipe Fittings 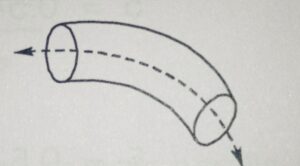 Bends are provided in pipes to change the direction of flow through them.

An additional loss of head, apart from that due to fluid friction, takes place in the course of flow through a pipe bend.

The fluid takes a curved path while flowing through a pipe bend. Whenever a fluid flows in a curved path, there must be a force acting radially inwards on the fluid to provide the inward acceleration, known as centripetal acceleration. This results in an increase in pressure near the outer wall of the bend, starting at some point A and rising to a maximum at some point B. There is also a reduction of pressure near the inner wall giving a minimum pressure at C
and a subsequent rise from C to D.

Therefore between A and B and between C and D the fluid experiences an adverse pressure gradient (the pressure increases in the direction of flow). Fluid particles in this region, because of their close proximity to the wall, have low velocities, and cannot overcome the adverse pressure gradient and this leads to a separation of flow from the boundary and consequent losses of energy in generating local eddies.

Where KL= Coefficient whose value depends on the type of fitting

7. Loss Due to Nozzle